Your Morning Tea... "Nationalized Police Force" Grab your full cup of tea, sit back and take this in.

From My Point of View

Let's start with a short Youtube of President Obama in 2009 as he expresses his desires for a Civilian Security Force in America.

Known as COPS (Community Oriented Policing Services), this task force “seeks to identify best practices and make recommendations to the President on how policing practices can promote effective crime reduction while building”.

The link to the Executive Order:

The following article is from: The Tea Party Network and was written by: May 7, 2015 by Steven Ahle 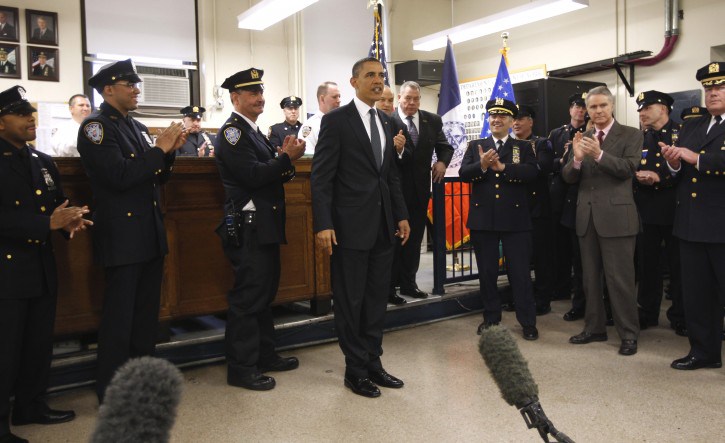 "You will hear and obey me"

"Baltimore will soon be the first national police force that Obama promised and Al Sharpton has been promoting. (I’m waiting for the IRS to announce they made a mistake and instead of owing taxes, Sharpton has a 20 million dollar refund coming) For a while it looked like Ferguson would hold this distinction after Eric “Fast and Furious” Holder announced that the police force there was racist, but they weren’t willing to roll over. Obama will force it on them eventually, but Baltimore will be the first.
The mayor of Baltimore, Stephanie Rawlings-Blake has requested that Loretta Lynch come in and take over control of their racist police department, even though almost half of their officers are black. Lynch testified in the Senate today and she was asked about the request from Baltimore and she claimed that she had not decided yet whether to accommodate Rawlings-Blake yet. Yeah, and OJ is still looking for the real killer. I predict that within the next seven days Lynch will be all over Baltimore.
I wrote an article about Obama announcing he was nationalizing all state and local police departments:
http://redstatements.co/obama-announces-his-plans-to-nationalize-lo...
This will become the liberalization of the police force. There will be a quota of how many blacks and Hispanics can be arrested and charged with crimes. Liberals and Rand Paul have dreamed of this for a long time and now Obama will make it a reality. No matter how disastrous the results are, Obama will hail it as a major victory and then issue an executive order allowing him to expand his control over the police all over the country. It’s being described as a review but if you put lipstick on a pig it will still be Michelle Obama.
Dealing drugs will become misdemeanors and using drugs will be a small fine. Murders will become justified depending on the race of the killer and the killed. Poverty will be an excuse to overlook criminal actions and rioters will be viewed as mini MLKs.
And this is only the beginning. Obama has to work fast."

THE DOJ TASK FORCE REPORT opens with the following statement:

"We wish to thank President Barack Obama for giving us the honor and privilege of leading the Task Force on 21st Century Policing.
The task force was created to strengthen community policing and trust
among law enforcement officers and the communities they serve, especially in light of recent events around the country that have underscored the need for and importance of lasting collaborative relationships between local police and the public. We found engaging with law enforcement officials,
Technical advisors, youth and community leaders, and nongovernmental organizations through a transparent public process to
be both enlightening and rewarding, and we again thank him for this honor."

All of the following information was written by a member of the First Coast Tea Party Facebook page. (She has requested to remain anonymous)

When this FCTP "Blogger" learned of the Executive Order she began her research. You will find her information educational, insightful and entertaining to read.

She has taken each of the SIX PILLARS of the report and responded to them. (6 BLOGS)

She then researches and does a comparison as noted below:

THE FINAL WRAP UP A Comparison of American Activity to that of Nazi Germany.. Is it true?
https://realizationsruminationsandlife.wordpress.com/2015/03/21/oba...

She then presents a much more detailed look into the Task Force Members:

Other areas of the Task Force Report are as follows:  If you read the entire report you will find more information on these sections.

"We need to ask our local law enforcement leaders what they would do when Obama tries to do this all over the country or in our own city."
“We need to ask what will WE THE PEOPLE do should this happen.”

When you look at our world today what is "Your point of view?" If you would like to have your blog posted and shared for discussion please write it up and send it to us at firstcoastteaparty@reagan.com

For future reference this information is available on the main page of the website at:
www.fctpcommunity.org

Visit us on your Facebook page for daily news and general information:

Foolish Americans believe this all started with obama and will stop when his term is up.

It's the same story line as the "Fiddler on the Roof"..........Jews cowered and endured more and more oppression until finally the day came when their oppressors told them to get out....leave their homes and city.

Americans endure more and more oppression while they wait for the next election, wave their flags and shout USA USA USA.  Or remain oblivious to anything beyond this weeks paycheck and TV schedule.

Oppressors never stop on their own.

This is the good old US of A........that stuff could never happen here.....Nice thought to keep one going while enduring more and more oppression.

“You will hear and obey me” is enough to make the hair stand up on the back of your neck. Visions of the SS being reincarnated is believable. These last two years of Barack the Insane’s term will make history. He’s not done with his transformation of America.

This needs to go on FB. I just saw a comment today about Alvin Brown wanting to implement federalized policing. That is unacceptable and even more important to vote him out of office.

There are so many links. How can I condense them into one email to send out to my email friends? And cut and paste to my FB page? Any ideas out there?

You are right.................this is a huge WOW!!!  The innocent people along the way that have been killed and arrested for the sake of moving this effort along is staggering.

WOW,, I just found this.. Take a look and a listen.

Does anyone believe we can stop this at the voting booth ?Remember the overthrow of our country is implemented by millions of government employees some are your neighbors--your friends--your relatives--your own churches HUMANATARIAN GRANTS  to help the poor.--- Obama doesn't do it by himself.The only chance we have is civil disobedience-- riots--arrests -- all at places and times well chosen. We must shut down the government with whatever action it takes. Peaceful rallies--coming together for peace etc. is all horse*hit. Surely we will not just roll over like wimps and let this continue another day.

From the Daily Caller: 3/2 http://dailycaller.com/2015/03/02/obama-unveils-national-obamalaw-p... (Tea Party.Org reported this article as well)

“After a shooting spree, they always want to take the guns away from the people who didn't do it. I sure as hell wouldn't want to live in a society where the only people allowed guns are the police and the military.”