NO TIME FOR TEA TODAY.

TIME TO GET TO WORK.

1. Send the one step e-mail

A Jacksonville Human Rights Ordinance (HRO) -- a City Council proposal that would expand anti-discrimination protections to the LGBT community for housing, employment, and public accommodations -- is not, by nature, based on an accurate understanding of human rights violations.

The language in the proposed bill was specifically chosen to market a controversial issue and also attempt to obscure the real motive for it. (Have a look at the proposed bill in the attachment at the end of this column.)

The goal of the national human rights movement  is to have cities like Jacksonville legally place a societal imprimatur on behavior which is against Natural Law as understood by human reason. This is objectionable to a majority of people, including those with deeply held religious convictions.

If the ordinance passes, it would financially harm numerous businesses opening them up to frivolous lawsuits, as well as irresponsibly placing women and children at risk for assault in bathrooms, showers and locker rooms.

Putting human rights violations in perspective, we can look to history.

Adolf Hitler and Joseph Stalin were ruthless dictators whose regimes violated human rights. They mercilessly starved and killed millions of Jewish men, women and children solely because of their faith.

In America, slavery was the central issue at stake fighting the Civil War. Northerners fought southerners to free slaves from the brutal, inhumane practice of ownership of black Americans in the U. S. Southerners wanted to continue slavery for their economic profit by harnessing free labor.

It was so bad that in a U.S. Supreme Court decision, Dred Scott v. Sanford in 1857, blacks were not even considered citizens.

Slavery was a grave moral injustice and finally eradicated by President Abraham Lincoln. The Dred Scott decision was overturned by the 14th Amendment.

The Civil Rights movement in 1960s peacefully sought to eradicate unjust laws against blacks in education, seating at restaurants, use of hotels or water fountains, seating in transportation, etc.

Those are examples of authentic human rights violations.

The proposed Jacksonville HRO is egregious and illegal. Under the specious argument of "discrimination," the law would strip business owners and citizens of Jacksonville of the rights guaranteed to them under the U.S. Constitution, specifically the First Amendment in the Bill of Rights as it pertains to religious freedoms: “Congress shall make no law respecting the establishment of religion or prohibiting the free exercise thereof.”

The liberties guaranteed in the First Amendment are exactly why many pilgrims came to America: to escape the established government religion of the Church of England. Americans sought freedom to worship God according to their beliefs.

When Jacksonville City Councilmen take their oath of office, they place their hand on a Bible and solemnly swear to “uphold, honor and defend the Constitution of the United States and its laws,” and end their investiture by stating, “so help me God.”

Whoever votes affirmatively for this bill does not possess a clear understanding of the Constitution.

More important, a yes vote would violate his/her professed oath of office as an elected representative of the people of Jacksonville.

The HRO is a solution to a problem that does not exist. In the past 10 years, only seven incidents in Jacksonville occurred which were resolved out of court.

Forbes Magazine, as well as The Wall Street Journal, currently rank Jacksonville as the No. 2 city in the country to live in, and its economy is thriving without this ordinance.

It can also be argued that some in the Jacksonville Council, whether knowingly or not, are "establishing a religion" with a totalitarian world-view called by many names, including secular atheism and cultural Marxism, where God is not acknowledged.

If the HRO bears merit at becoming a law, the decision should be put in front of the voters on a citywide referendum. The open-ended language in the legislation (Section 8) giving the General Counsel’s Office permission to further add to this deeply flawed bill after its passage is reason enough for its defeat.  That wording is a blank check with unknown outcomes that no conscientious member should vote for.

Nineteen people on the Jacksonville City Council do not possess the authority to strip the Constitutional rights of the citizens of their community guaranteed by the laws of our country.

Mayor Lenny Curry should let the City Council know, in no uncertain terms, that if they pass the HRO, he will veto it and allow the people of Jacksonville to decide.

One Page Analysis Of The 2017 Ordinance

Don’t spend much time on the letter itself (a few sentences or paragraph will do) – Send the emails, and get to the Council meeting. 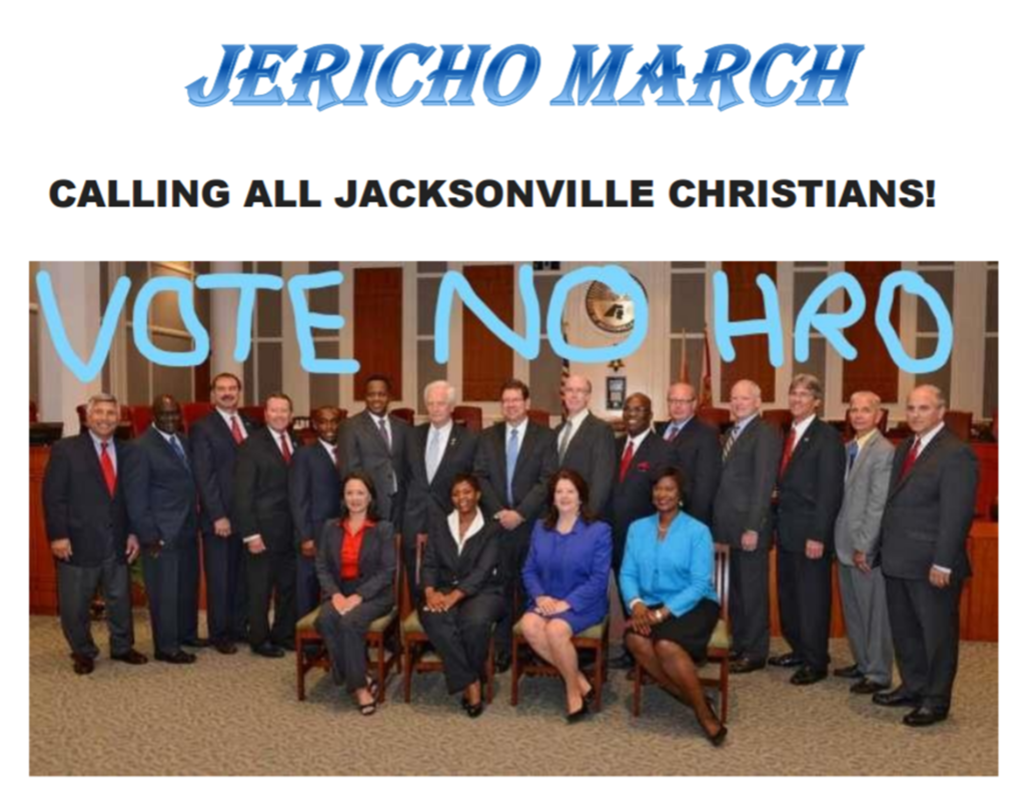 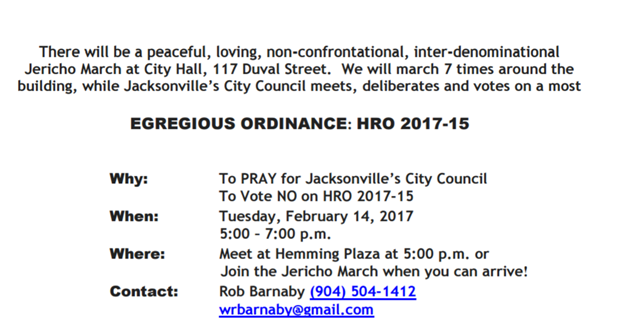 Tuesday, February 14, 5pm, Council chambers, City Hall, Downtown at Hemming Park.
If our turnout is small, we lose, because the LGBTs will pack the room.
The bill can be defeated ONLY if certain Council members fear your future vote.  Only your attendance will convince them.

Please do the following:

Get to the meeting.  Arrive at least 45 minutes early, to assure a seat.  The LGBTs intend to pack the room.

Take a moment and watch the following video

Charlene Cothran - former gay activist and publisher of Venus Magazine, (a magazine for black lesbians), shares her testimony of being a leader in the world of gay publishing and how Jesus Christ set her free from the bondage and the deception of homosexual confusion.

"I want to stand for something, and it's probably going to be something that some people stand against."

Comment by robert c tipton on February 13, 2017 at 1:36pm
IS anyone filing a complaint required to submit proof that they are a homosexual??blood tests--urine tests-- videos---affidavits .seems rather important eh what??otherwise how do we know it is a legitimate claim ??

It largely looks like the second and third "whereas" tell the tale: It's about money and attracting business in competition with other parts of the state and region.  Religion and small businesses fall past that.  Though admittedly, so does the nod to LGBT, thought the last place is often the place of honor, so to speak.

Section 6 is very weak.  How does one establish single sex facilities when the whole notion of gender/sex is mutable based upon how one 'sincerely' feels?

Agree that allowing the General Counsel to enact legislation to suit.  I don't think typically that's how it's done, rather the specific wording of the new statutes are in the legislation as well as the wording that is replaced.

There is room to attack this based on it being too general and an abdication of the counsel's legislative authority, I think.