"When you look at the world today,

What is your point of view?"…

ed that the perfect political protest storm was about to disrupt the peaceful Historic District of St. Augustine, Florida. There was a "Spirit of America" Pro-Trump Rally scheduled at the Castillo de San Marcos. At about the same time, the Communist Left’s newly organized group, ”The Indivisible’s”, were assembling on the Davis Shores side of the Bridge of Lions. To add fuel to the fire, the feisty St. Augustine Tea  Party decided to deploy their largely ceremonial Dartmouth as a 'Battleship' to preserve the peace. All the ingredients for the potentially political battle were in perfect place.

The Town Crier, Chairman, Lance Thate, in his Saul Alinsky disguise, pictured in the center of the collage right, embedded himself with the Indivisibles. He then proceeded to cross the Bridge of Lions with about 45 anti-Trump protesters. The Town Crier Chairman has extensive experience in the Historic District, evaluating the public’s reaction and acceptance of political issues. His experience goes all the way back to 2011, and the Tea Party’s challenge of the 'Occupy St. Augustine' group. The 'Occupy St. Augustine' group and the Indivisible’s have common organizers. Although the demonstrators were carrying signs encouraging automobile traffic to honk, only one car actually did blow their horn and several cars slowed down to suggest that the protesters “Get a job.” “If our Town Criers had marched across this bridge, we would’ve gotten far better acceptance. The Indivisible’s clearly lacked widespread support,” Thate explained. As the group got to the end of the bridge

passage, the embedded Town Crier Chairman called for the Dartmouth, which was lying in wait in Davis Shores, to advance. The execution was perfect as the Dartmouth intercepted the Indivisibles just as they were turning on to the Bayfront. The Dartmouth is 35 feet long, 55 feet long including the towing vehicle, which effectively blocked the protester’s access to the public. Mr. Thate reports that, “When the Dartmouth arrived there was complete disbelief and shock at what they were seeing. The Dartmouth, complete with a full-sized cardboard cutout of Donald Trump, anti-Indivisible signs and Gadsden flags flying was a site to behold. Rapid-fire comments were blasting from the Dartmouth’s sound system. As the shock wore off and the Indivisibles  realized  that the real Tea Party had arrived, they began chanting,” Dump Trump, Dump Trump, Dump Trump……” Mr. Thate reports that this was not terribly effective because it sounded more like "Trump, Trump, Trump, Trump…" Frustrated, they did not walk alongside the boat. The Indivisibles choose the seawall instead where they continued on to the Castillo de San Marcos. The Dartmouth effectively blocked their demonstration from the public view. In the pictures shown above, the upper left and lower right, are Indivisibles. They are so far removed from public view that they could easily have been mistaken for Pro Trump demonstrators. The rest of the people in the photograph are Pro Trump. 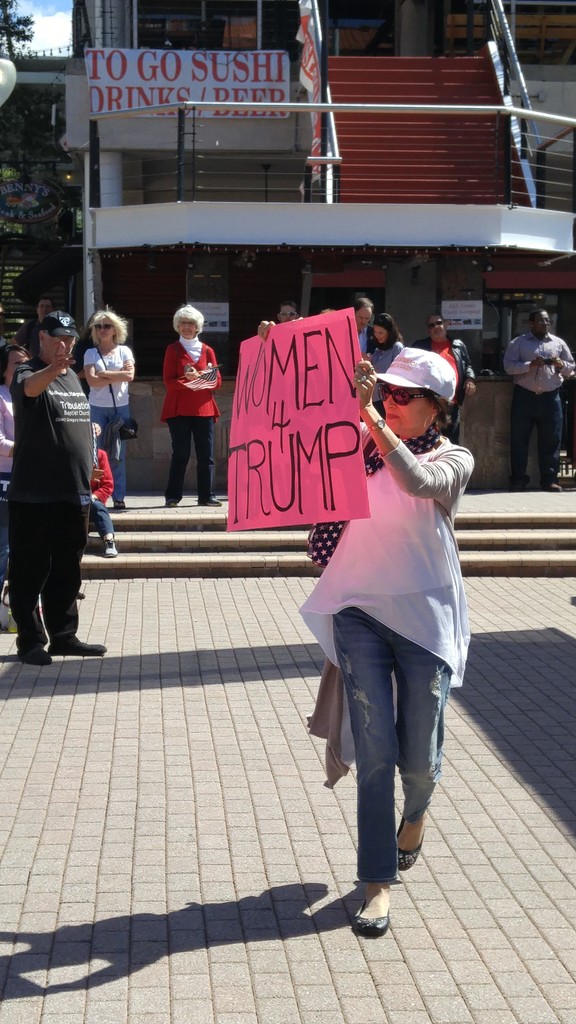 On March 4th 2016 Citizens of Duval and surrounding counties joined together for the Spirit of America Rally at the Jacksonville Landing.

The spirit of America was felt in the hearts of all who attended as the patriotic music of "Let Freedom Sing" surrounded the venue.

The words of Representative John Rutherford seeped into the minds and hearts of all in attendance as he shared his newly learned experiences in Washington.

The words of Representative Jay Fant as he shared news from the halls of the legislature in Tallahassee.

Others who shared their experiences and gave us all a feeling of pride and encouraged each person to stay involved in local, state and federal government. To hold our elected officials accountable and to continue to fight for this great country called America. 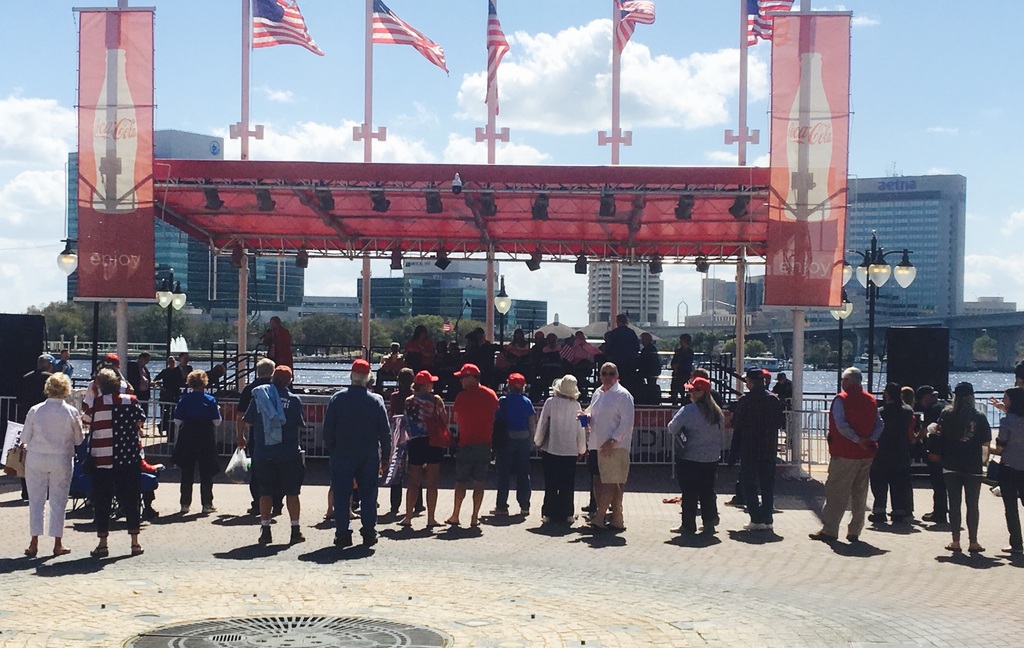 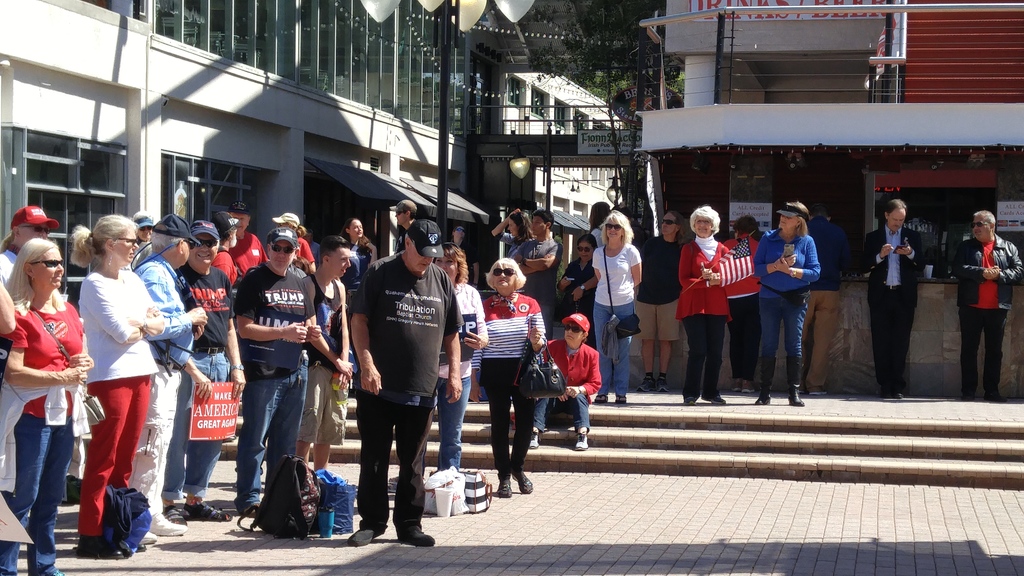 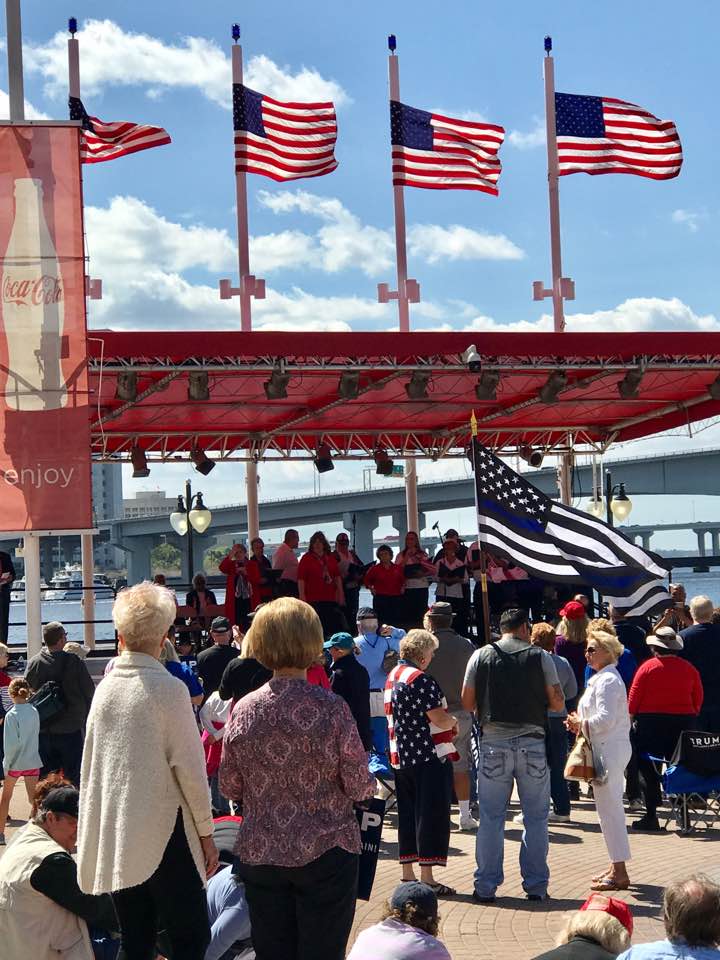 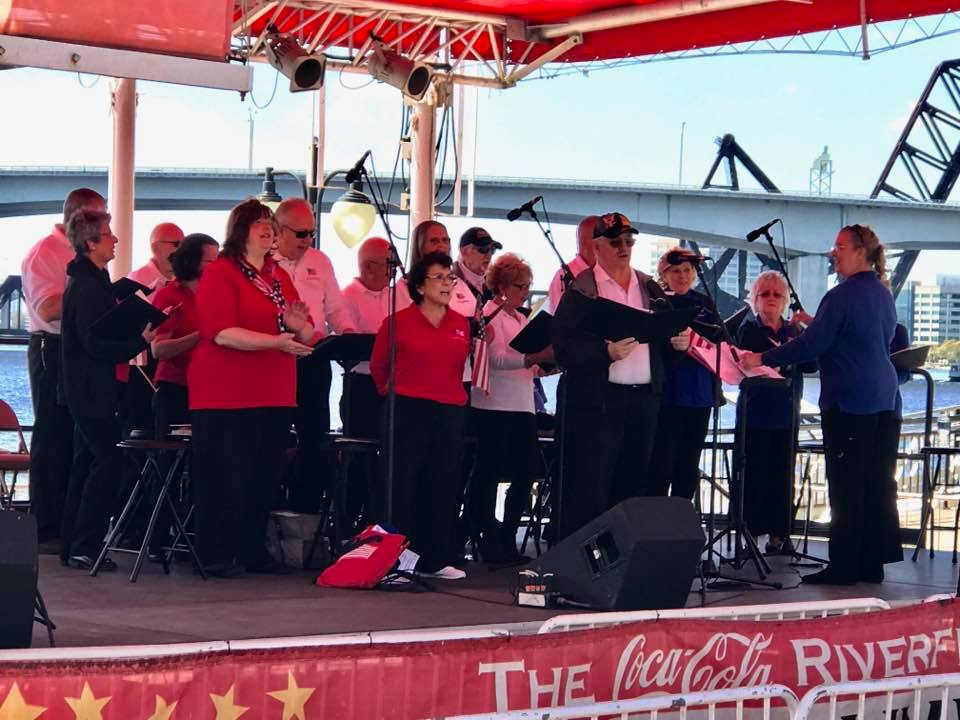 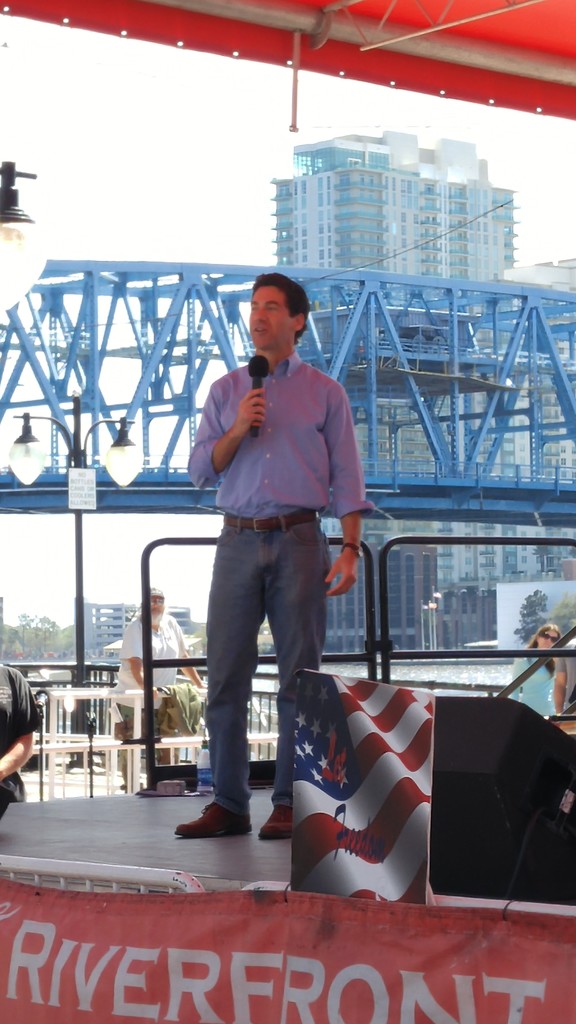 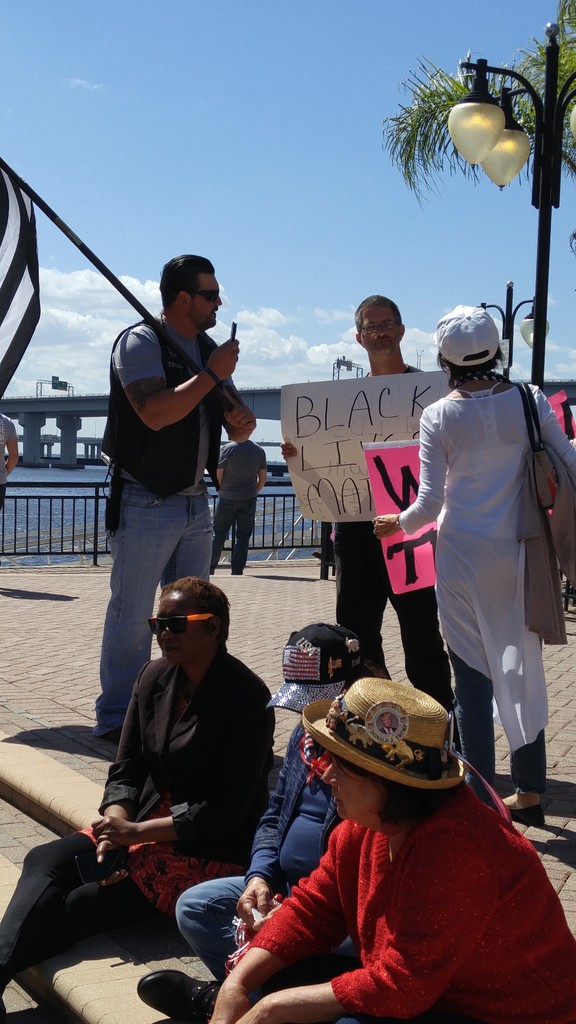 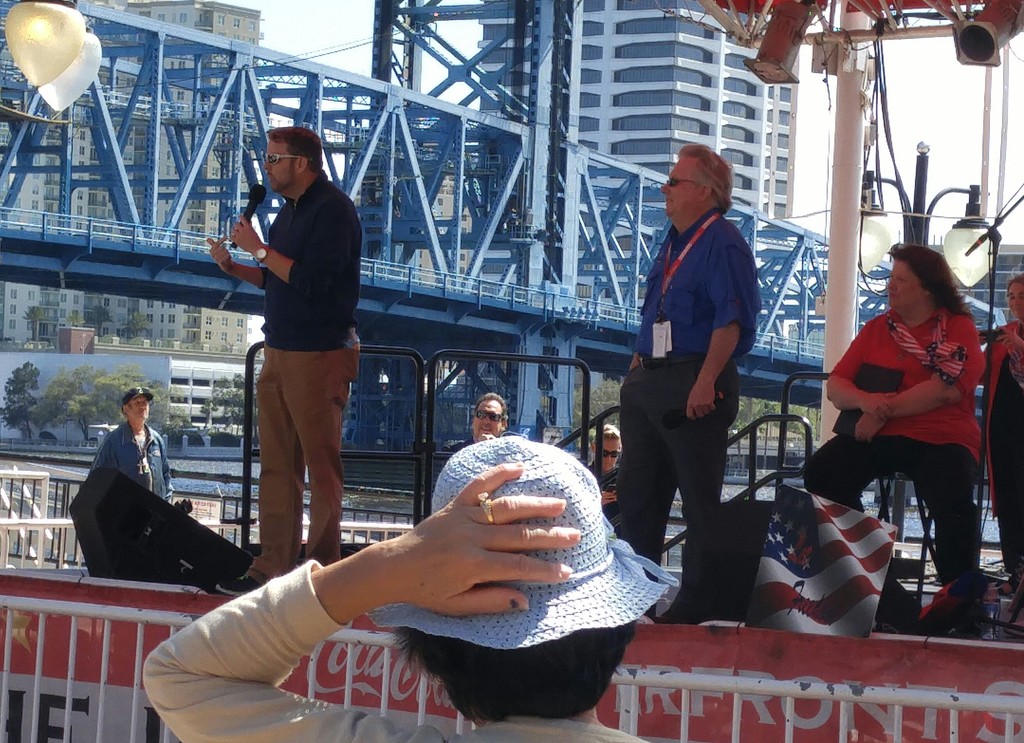 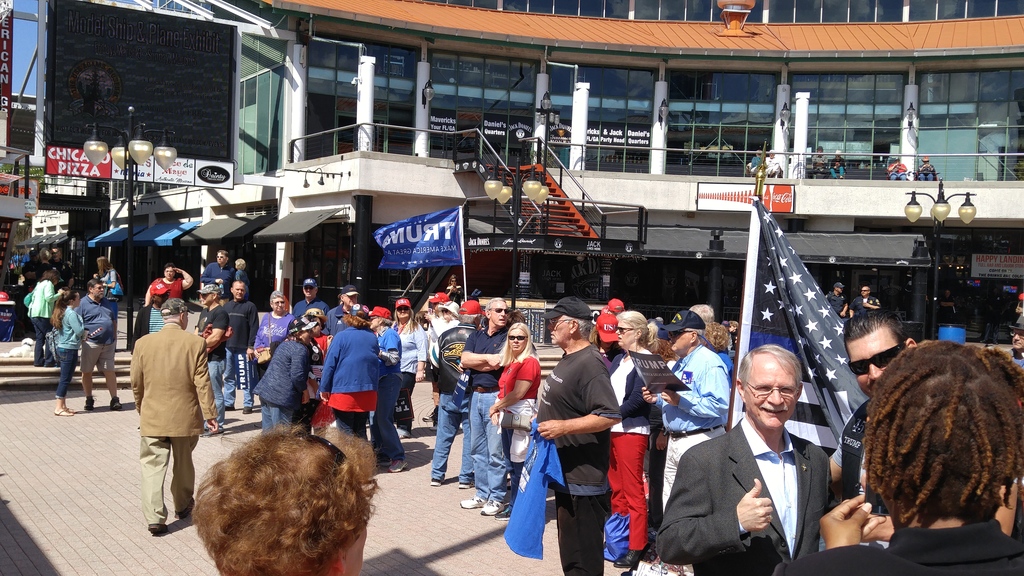 What makes us strong -united -and determined to never ever quit.

A strong America that preserves and protects opportunities for future generations.

To effectively impact our local communities, to include the selection and actions of our elected and appointed officials.

We Believe in Individual Freedom and Personal Responsibility...Our founding fathers understood that personal freedom came with a price known as personal responsibility and you could not have one without the other.

We Believe in Liberty...Inspired by our patriotic, intellectual and moral obligations; we resolve to carry forward to the next generation the mantle of liberty, for which so many have already sacrificed so much.

We Believe in Godly Principles...Our nation was founded on Godly principles and wherever men have sought to worship government as their god, that god has failed them.

We Believe in Free Markets...The government should allow free market capitalism to flourish while not micro managing any industry the government knows nothing about.

We Believe in the Constitution...It is our duty to defend The Constitution of the United States, the Bill of Rights and the Declaration of Independence, know that if we fail, we will be responsible for losing our freedom and destroying ourselves.

We Believe in American Exceptionalism...That the United States is a uniquely free nation based on personal liberty, individual rights, and decentralization. We believe that the foundation and development of the United States has been fundamentally unique in the history of nations. And because of this, we see that America has a unique  place and role in human history.