And I'm proud to be an American, where at least I know I’m free. And I won’t forget the men who died, who gave that right to me.  - 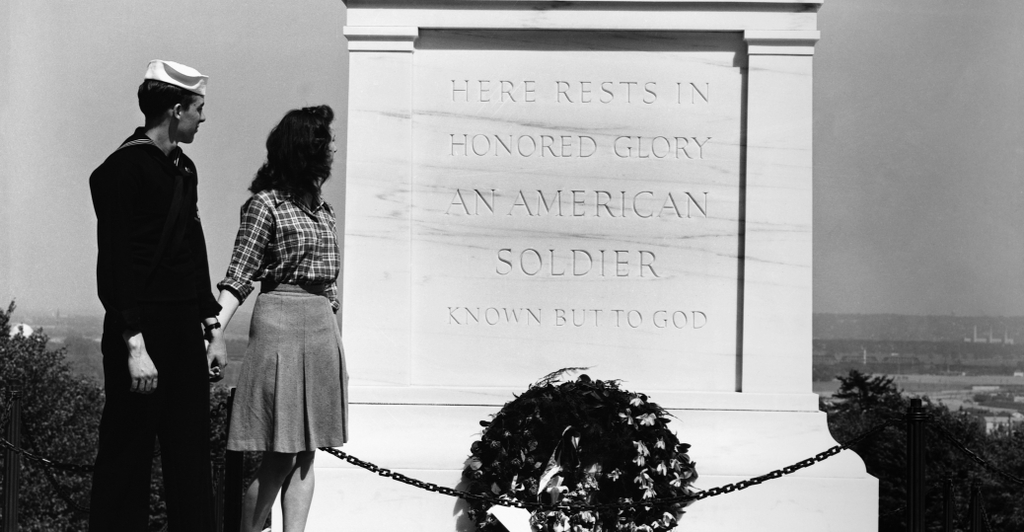 The Tomb of the Unknown Soldier

"It's been said that one must die so that others may know the full value of life. The freedom to live Life, experience Liberty and pursue Happiness to its fullest has its costs, and a pretty steep one at that. That’s what Our military does for us. They pick up the check so that the rest of us may enjoy the land in which we live. They fought not only for our freedom, but for the freedom of their fellow human beings, and for the freedom granted to us by Our Lord and recognized by the Founders of our nation. On this Memorial Day, please remember the price of freedom. Our deepest gratitude to those who paid it on our behalf. From the most decorated General, down to the lowly but ambitious E-1, we owe them a debt of gratitude . To all who serve and have served - The Francis Family   Thanks you."

And The First Coast Tea Party Thanks You.

For a listing of all National Cemeteries

The remains of so many of our service men lie in foreign fields, a soldier whose sacrifice is forever commemorated in one of the 24 permanent American burial grounds outside the United States.

About 125,000 U.S. war dead are buried in these overseas resting places. The cemeteries are maintained by the Arlington, Virginia-based American Battle Monuments Commission, which also maintains memorials in New York's Battery Park, San Francisco's Presidio and its newest memorial, the Vietnam Pavilions at the National Memorial Cemetery of the Pacific in Honolulu.

The battle monuments commission was created by Congress in 1923. Foreign cemeteries for American military members existed earlier, but most conflicts before then were fought at home or incurred fewer casualties.

World War I changed everything.

"Given the number of those killed on all sides, the U.S. did not know what do to. How can you bring this many over? But they also had to figure out a way to commemorate why these men died, their sacrifice," said Tim Nosal, the commission's director of public affairs.

"The idea was, if we establish cemeteries, the soldiers and sailors become the monument."

Among the first cemeteries was Meuse-Argonne in France, containing more than 14,000 American military dead, the largest number interred in a single place in Europe. 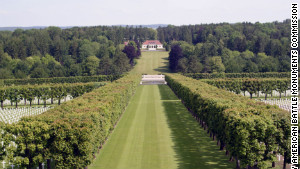 Meuse-Argonne American Cemetery in France is the largest American cemetery in Europe.

Today, the overseas cemeteries are visited by family members and history buffs. Many are located near major tourist centers around Europe, although "they weren't necessarily located because something was popular or beautiful but because something happened with specific meaning,"

Families of deceased World War I soldiers were given choices regarding their loved ones' remains. Among them were burial in these overseas cemeteries with perpetual care; return to the United States to a national cemetery or to a family grave site; or sending the remains anywhere in the world, with the family responsible for funeral costs. About 20% of families chose overseas cemeteries.

"They took so many casualties, we decided it was hallowed ground,"  referring to Meuse-Argonne, adding, "when you leave the cemetery you are literally walking in trenches of the war."

The military repeated the program for World War II, leading to the creation of the battle monument commission's best-known cemetery, Normandy, which appeared in the closing scene of the movie "Saving Private Ryan." Legislation in 1947 put World War II cemeteries in the commission's care, as well.

"The Normandy campaign is so important for the world and for the United States and its history. This is why it so resonates with people. "If you think about it, this was the first time the U.S. was leading an Allied force, so it propelled the U.S. into a superpower. This is the beginning of the end for World War II. Hitler would be gone within 11 months."

France has 11 American cemeteries, the most of any other country. Belgium has three, the United Kingdom and Italy, two, Luxembourg and the Netherlands, one.

A few exist outside Europe and some have passed into the battle monument commission's stewardship, such as the oldest, Mexico City National Cemetery. It dates from 1847 and is the burial site of nearly 750 unidentified American soldiers killed in the Mexican-American War, and later from the U.S. Civil War and Spanish-American War. Another cemetery in Panama dates from 1914 with remains of soldiers and others from Panama Canal construction and conflicts.

Manila American Cemetery and Memorial in the Philippines is the largest of the overseas cemeteries, with more than 17,000 Americans, marking World War II's Pacific Theatre. Another in Tunisia holds remains from World War II's North Africa battles. Even earlier battles the U.S. fought in North Africa along with those in Mexico are reflected in a line from the Marines' Hymn: "From the Halls of Montezuma to the Shores of Tripoli."

By the Korean War, there was "a conscious decision to return all the remains back home," with technological advances speeding the process. A new overseas memorial -- not a cemetery -- will open next year in Busan, South Korea, in the United Nations Memorial Cemetery and Peace Park.

Various travel companies bring Americans to these cemeteries and other war sites.

Vietnam veteran Butch Sincock, president of Pennsylvania's MilSpec Tours, believes showing them to a new generation is important. Even if veterans themselves aren't able to go, those close to them can; some of his European tours have included family members of George C. Marshall, an architect of the post-war plan to rebuild Europe.

"World War II vets are literally dying out, unfortunately," Sincock said, "but some of their adult children are taking interest."

Carol Malone's son, Bruce, is superintendent of the commission's Rhône Cemetery in France. Himself a military veteran, he said "it is an emotional event to visit, but we also show the families the level of care we take for these beautiful memorials. That helps sometimes, that their families, these soldiers are being taken care of very well. It also helps to put into context what happened where they died, and what they were fighting for."

Bruce Malone first learned at age 12 that his grandfather was buried in Belgium after he was killed in 1944. The knowledge "sparked a love of military history ever since. I can understand what it means to the family to have a relative who never came home."

It was his research that inspired his mother to visit the overseas cemetery on Memorial Day 2004. She weeps now to remember it.

"All you see is row after row of white crosses," Carol Malone said. "You just stand there and you are speechless. You can't imagine until you see it in person, I always think how many gave their lives."

As overwhelming to her was the love locals showed the cemetery.

"One thing I will never forget, the hundreds of people at the memorial," she said. "The Belgian people are so thankful now. There is a group that has adopted my father's grave.

They put out flowers and visit my father's grave."

Young Americans might benefit most from a visit, Carol Malone said.

"I don't think it would have been a free country had these men and women not gone over and fought," she said. "We would be living a different life and these young people need to see this."

A Look at some of the Overseas American Cemeteries and Monuments 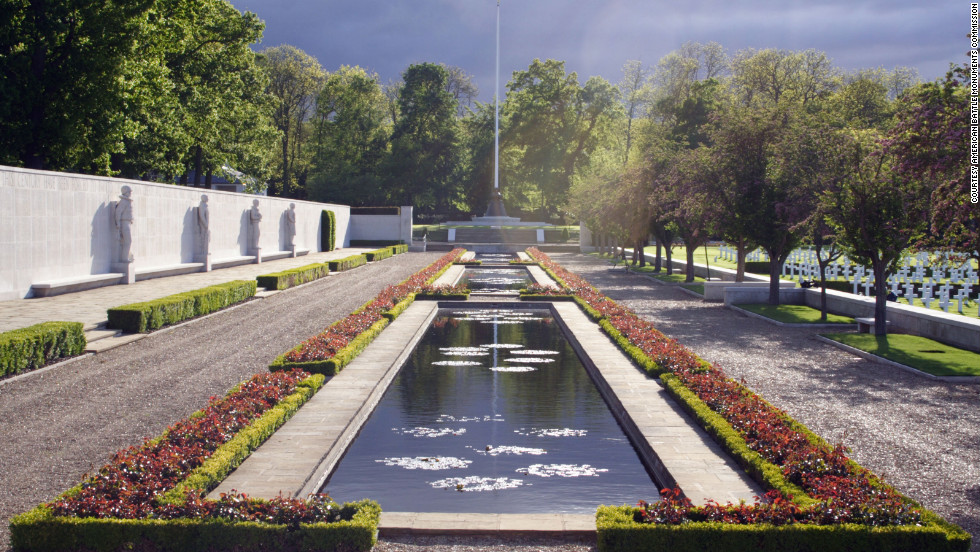 The Cambridge American Cemetery in the United Kingdom - 9,000  One of two cemeteries in the UK 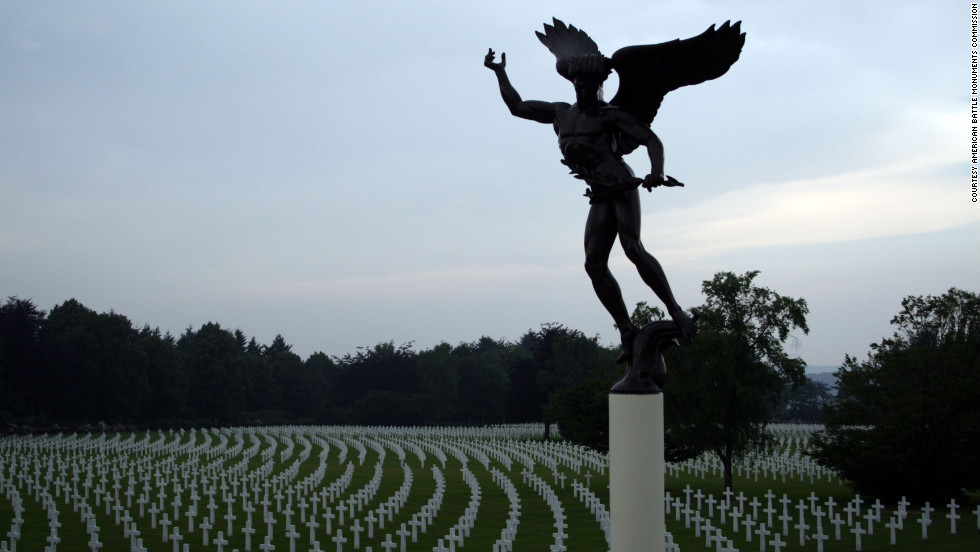 The Henri-Chapelle American Cemetery    8,000  in Belgium 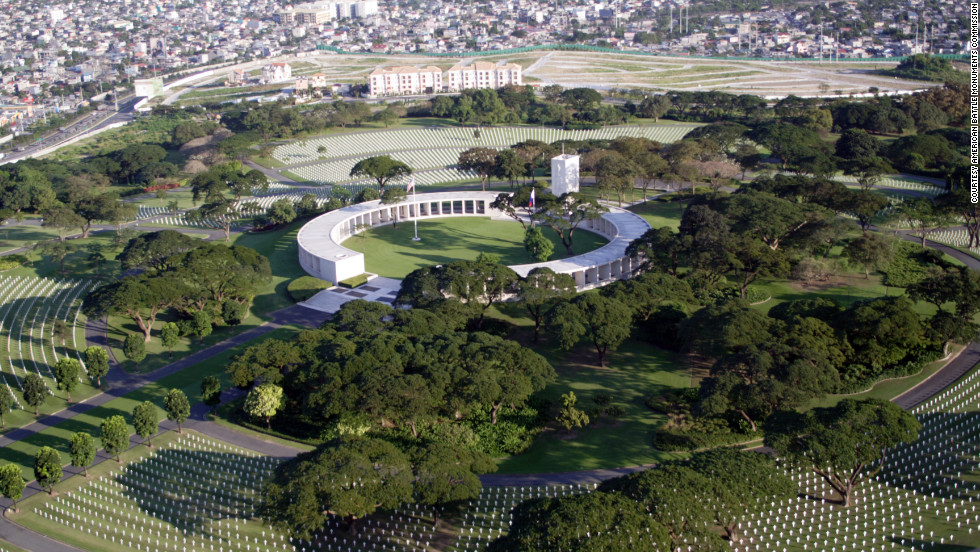 The Manila American Cemetery   53,000 in the Philippines 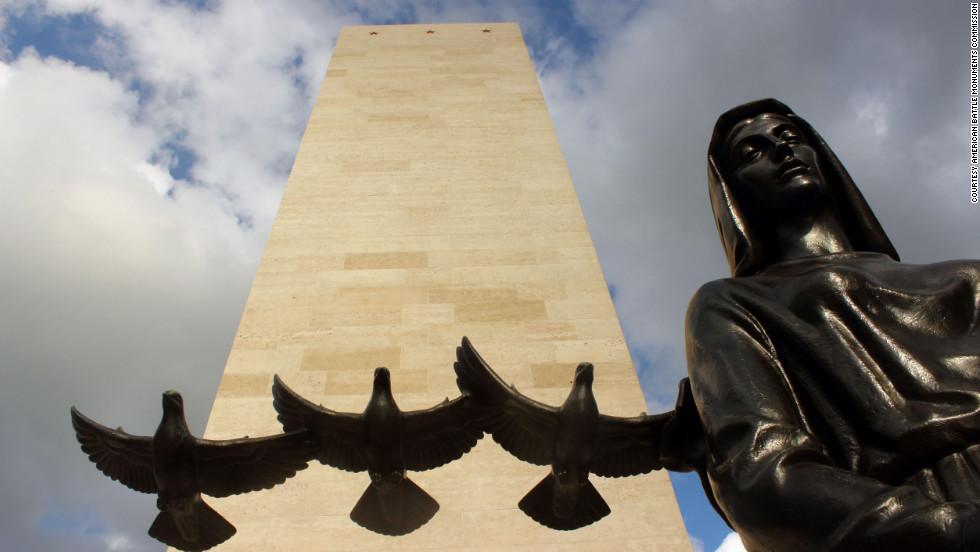 A Mourning Woman Statue     The Netherlands 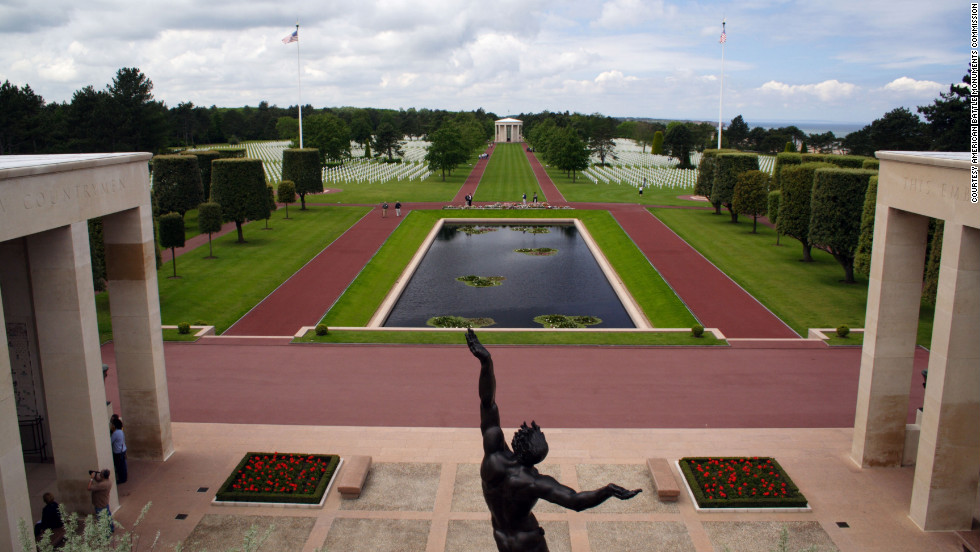 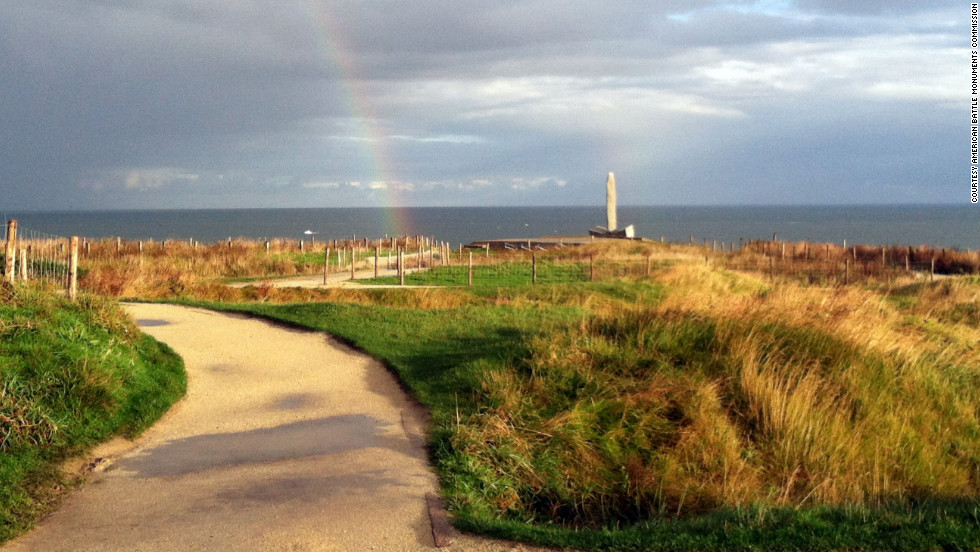 Pointe du Hoc Ranger Monument   8 miles west of Normandy American Cemetery. In honor of U.S. Army Rangers who scaled a 100 foot cliff to hold back the German soldiers from firing on American troops who were landing at Omaha and Utah beaches. 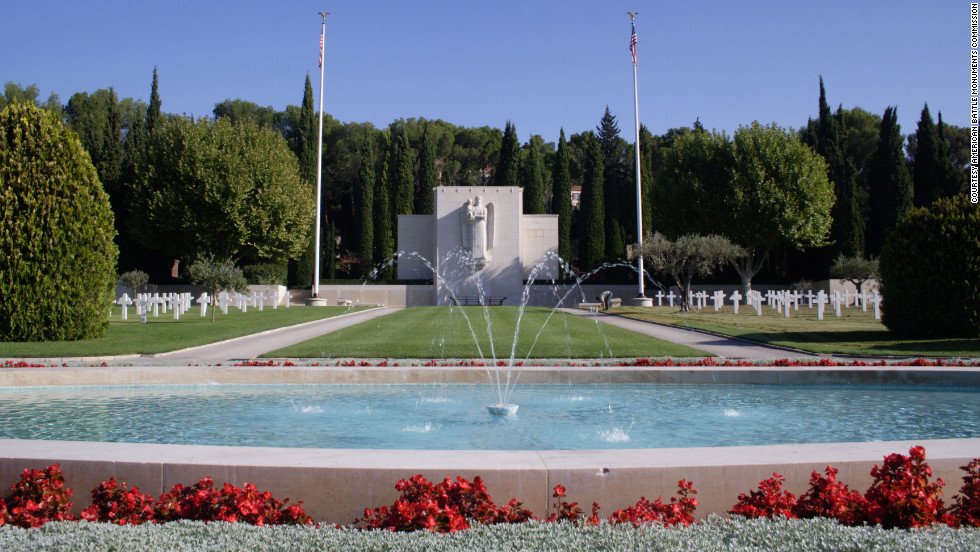 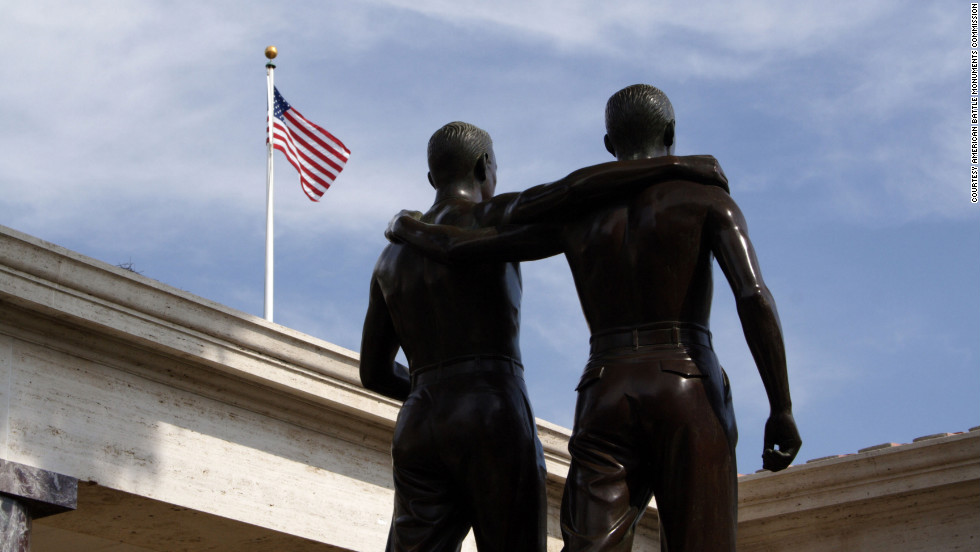 Sicily Rome American Cemetery - The Brothers in Arms Statue  in Italy.. Where 23 sets of brothers are buried side-by-side 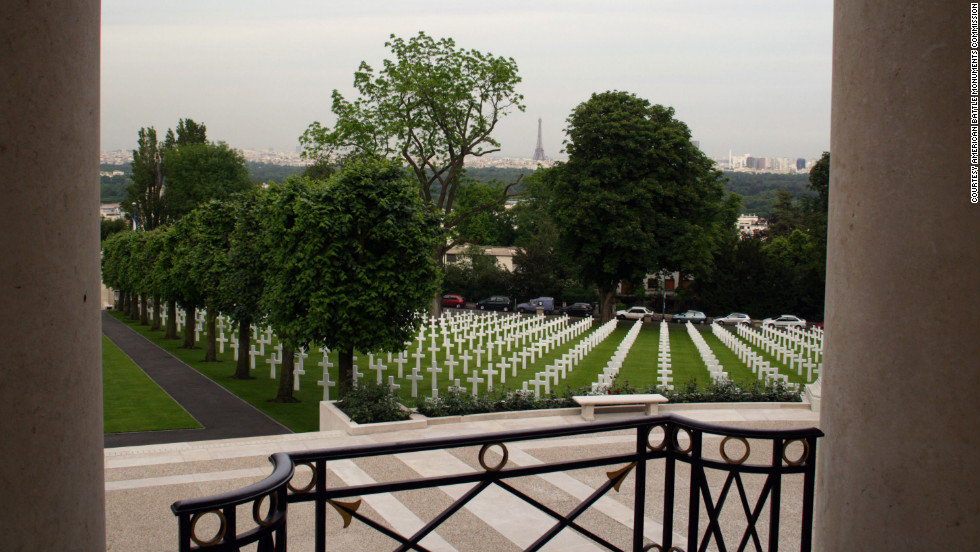 Suresnes American Cemetery  Outside of Paris   You can see the Eiffel Tower in the distance. 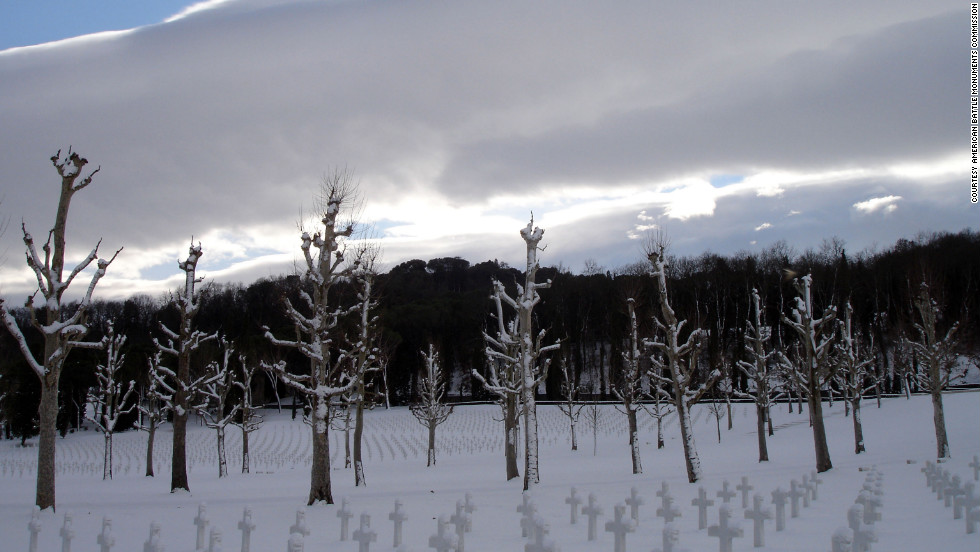 The Number: 1,500,000+ Men and Women have paid the ultimate price so that we can enjoy this Memorial Day as a Free People.

May We Never Forget.

May We Forever Honor Them

May We Forever Continue The Fight To Keep Our Nation Free

May Their Deaths Not Have Been In Vain.

They Are Watching Us.

The greatest glory of a free-born people is to transmit that freedom to their children. -William Havard


AND THE EAGLE CRIES 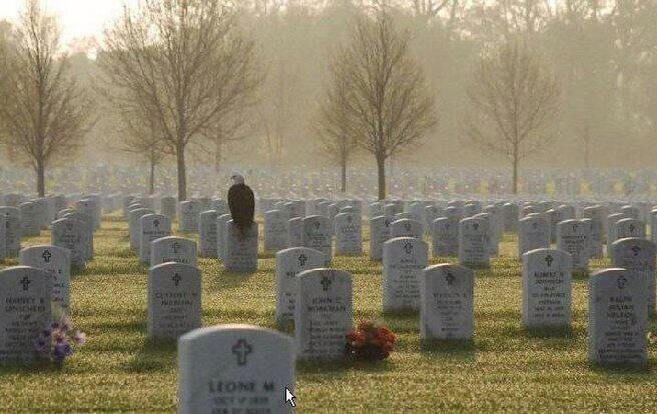 But with enough true patriots we can win back our freedom the way we first won it through rebellion and civil dis obedience. We have no other choice. We have been betrayed by our elected officials and more importantly by the greatest enemies of all   APATHY--SELFISHNESS--INDIFFERANCE of we the citizens. I no longer pledge allegiance to this corrupt third world country. I cherish the Constitution and those who have given their lives for an undeserving people. I am speaking of all of us--we let it happen--but no more. Judgment day is coming and God help those who are in the way. A spark is coming I know not where or when but I will be looking and waiting--I will be there regardless of the consequences.

It all came to naught.   The people could not win their freedom from their own government.