Words Are Not Ammunition In The Global War On Terror 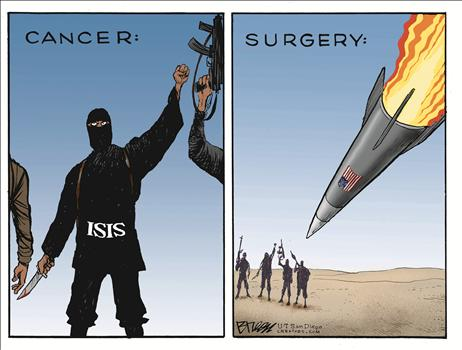 Islamic State: A 700-word speech from Martha's Vineyard on the Foley execution followed by a round of golf won't win the war on terror. Nor will a Justice Department prosecution or overreliance on special forces.

It's hard to fathom what good President Obama's wordy statement on the beheading of photojournalist James Wright Foley did.

"Their ideology is bankrupt," the president said of Foley's savage killers, and they only "claim out of expediency that they are at war with the United States or the West."

"Bankrupt" is hardly an appropriate word for a force that the U.S. could have stopped months before it looted hundreds of millions of dollars from the central bank in Mosul. With its own country now, this al-Qaida mutation is the best-funded terrorist group in the world, and it very much is at war with the U.S.

"People like this ultimately fail," Obama said, "because the future is won by those who build and not destroy."

That depends. We must sustain the nerve to do some destroying ourselves. The very reason the new Islamic State came into being is because we lost our military nerve in Iraq, then in Afghanistan.

As Bret Stephens points out in Commentary, Obama's substitution of American power with "an as-yet-unnamed and undefined formula for the maintenance of global order" has led to Tehran, Beijing and Moscow all making moves "to reshape and revise regional arrangements in a manner more to their liking."

"It's no accident," he wrote, "that while acting independently from one another, they are all acting now."

Read the Article on IBD...