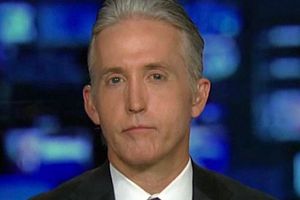 While he is no Carey Grant, Brad Pitt, or even Ronald Reagan, South Carolina’s hard-nosed Republican Congressman Trey Gowdy, who appeared on a couple of episodes of the TV show “Forensic Files,” is by far one of the most respected and feared members of the House.

Gowdy currently chairs the highly-touted Select Committee on Benghazi, where he has been tasked to look into exactly what occurred on the night the U.S. consulate was attacked, leaving four Americans dead.

Rep. Gowdy, who sports arguably the most fashion-forward haircut in Congress, flew down to Florida this week to support two of his friends, former Congresswoman Sandy Adams, who is running for Congress in Florida’s 6th congressional district, as well as Rep. Ron DeSantis, who is running for the U.S. Senate seat Marco Rubio is vacating in 2016.

Gowdy was tapped to give the keynote address at the Volusia County Republican Party’s annual Lincoln Day dinner in Daytona Beach, where he drew a crowd of just under 700 to the event.

During his address, Gowdy warned the group that those waiting for the next Ronald Reagan, or Abraham Lincoln, would be waiting a very long time for that day to come.

And for those of you, who are waiting for another Reagan or Lincoln, you are going to have a very long wait. I don’t see our culture ever allowing someone to be that revere again. If you are waiting for a knight to ride in on a horse to rescue our party, I don’t think its going to happen.

Gowdy then went on to acknowledge the real individuals who made the country great-those who veterans who lay at Arlington National Cemetery, and everyday Americans that get up every morning to make a better life for themselves and their families.

I caught up to Gowdy after his address, where I asked him for his take on the Obama administration’s foreign policy. Gowdy echoed what Sandy Adams told me earlier in the evening, in saying that the Obama’s foreign policy was projection nothing more than of weakness to our enemies around the world.

His message was very clear if we want to save America it is up to each of us..We must get involved and we must educate everyone we know.. We must step outside of our comfort zone and engage those who do not understand what is at stake.

"DO NOT TELL PEOPLE WHAT TO BELIEVE BUT TELL THEM WHY YOU BELIEVE THE WAY YOU DO."

SHOW THEM THE LIGHT.

God Bless you and may GOD BLESS OUR AMERICA


“Freedom is never more than one generation away from extinction. We didn’t pass it to our children in the bloodstream. It must be fought for, protected, and handed on for them to do the same, or one day we will spend our sunset years telling our children and our children’s children what it was once like in the United States where men were free.” President Ronald Reagan

This was an evening to remember!  Congressman Trey Gowdy inspired everyone in the room with his message for those  of us gearing up to be "messengers for Election 2016."

Congratulations to the Volusia County REC for their efforts in putting together a great evening!

Thanks for updating me!  I couldn't have gone, but I like to repost events on fb and twitter.

Jeanne this event was last night.. It was posted on the main page for a couple weeks and up as an event. I am sorry you missed it..

I don't see any information regarding tickets, directions, time of event, etc.

I was blessed and was able to  attended this event. I cannot tell you how powerful the message was that Congressman Gowdy sent. While we see him during his Benghazi investigations the man who spoke last night did so with a quiet sense of urgency. His demeanor was calm but he spoke with a great sense of confidence about what it is going to take to save our great country. With a room of over 700 people you could have heard a pin drop....There is little doubt in my mind that if we do not "circle the wagons" and do our part in educating those who do not see the danger then we will have failed our children, grand children and all of those who have fought for this thing called freedom. We know what we stand for, what we believe and we must share these things with everyone. Insults and lies do not work..What does is sharing facts, with confidence and a deep sincerity. He gave us all a dash of hope and that hope must be shared. WE THE PEOPLE must be the messengers. It starts and it will end with us.