More racial violence erupts in Greensboro (and many other places....see map)

Mr. Obama and Holder have gotten what they worked so hard to accomplish, but the government media isn't covering it.  Mobs of blacks and lots of violence all over the place.  There is  a list of areas at the end of this article.  I am so ashamed of these people for inciting rioting and their hate and contempt for the laws of our country. 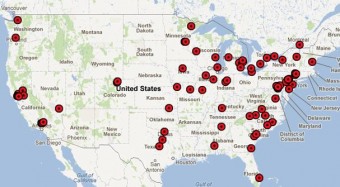 'This is incredible, the rate at which things are escalating'

Editor’s note: Colin Flaherty has done more reporting than any other journalist on what appears to be a nationwide trend of skyrocketing black-on-white crime, violence and abuse. WND features these reports to counterbalance the virtual blackout by the rest of the media due to their concerns that reporting such incidents would be inflammatory or even racist. WND considers it racist not to report racial abuse solely because of the skin color of the perpetrators or victims.) Videos linked or embedded may contain foul language and violence.

I get a lot of tips on black mob violence from WND readers around the country. Some I know about. Some I do not. Some are true. Some are not.

Many are from cops. Lots and lots of cops. Here’s a message this morning from a Texas cop, a 20-year veteran and a regular correspondent on the topic of black mob violence:

“This is incredible, the rate at which things are escalating. On the streets, out here, the attitude is one of entitlement which I haven’t seen.”

I get that from cops all over the country. Even Greensboro, N.C.

This morning, my email and twitter streams were full of information about Greensboro. The conversations kind of went like this:

“Did you hear about the black mob violence in Greensboro?” asked one reader.

“You mean the Fourth of July where hundreds of black people filled the downtown both before and after the fireworks? Fighting. Destroying property. Defying police. Violating curfew? Where it got so bad they had to use pepper spray?”

“Oh you mean the run up to the Fourth of July?” I asked. “When in the weeks prior to fireworks they had several incidents including one where 400 black people were in the streets fighting. On video. Destroying property. Defying police. Where it got so bad they had to use pepper spray and stun guns?”

Those were so bad the city council met in an emergency meeting the day before the Fourth of July to impose a curfew in the downtown. Maybe the WND readers were referring to last year.

“Are you talking about the Fourth of July last year?” I asked. “Where 1,000 black people filled the downtown after the fireworks. Fighting. Destroying property. Assaulting people. Defying police. Where it got so bad they had to use pepper spray and stun guns?”

I still had a lot of material to work with. Much of it from “White Girl Bleed a Lot: The return of racial violence and how the ... (New and improved edition soon out on WND Books.)

I use Greensboro as an example of a small, nice place with lots of black mob violence that few people know about. I pressed on:

“You mean before that, where a local TV station reported that “every weekend” in June leading up t... last year featured large-scale black mob violence downtown? Fighting. Destroying property. Assaulting people. Defying police. Where it got so bad they had to use pepper spray and stun guns?”

I wasn’t going to ask about the Greensboro concerts, parties and other public events that also feature large scale black mob violence. So much so that city council considered banning them.

That council member ended up supporting the curfew. But no one knows what would have happened had she decided to make a bigger deal out of it. But she assured them she would not be playing “the race card.”

Only one speaker belled the cat and identified the rioters as “black kids.” The other council members said the large scale violence was not really the fault of the people involved anyway. They placed the blame variously on jobs, housing, poverty, lack of recreation, lousy parents. All the usual.

They did have a midnight basketball program, several council members said. And that seemed to be working just fine. But their idea to hold a free movie downtown, and invite all the disaffected youths, as they did a month ago?

Let’s just say they won’t be doing that again.

Finally I Googled it and looked it up on Twitter: “Large fight Greensboro.”

All about half a mile outside of the downtown curfew zone. Six people were arrested.

Some in Greensboro took to the message boards to register their disgust with the lawlessness and anarchy that flourishes in their town on a regular basis.

“Keep up and Greensboro will be just another Detroit,” said one poster called OneLonesomeDove at the WXII TV news site.

“Was this black mob violence?” asked another. “If it was, you need to say so, and not be afraid of the repercussions.”

It was, said several people both in an out of the Greensboro police department. Whatever the repercussions may be of talking about black mob violence , Greensboro is seeing what happens when people do not talk about it.

None of the comments was posted at the local daily paper, the News & Record.

“Comments have been disabled,” is all the paper had to say about that.