The most obvious thing when you read some of the tweets is the absolute hypocracy far left loons display while being totally insulated from their own ignorance or double standards.  If a conservative had written even one of these, they would be in an uproar, but they go on inciting murder, and think they are the normal ones :).  Worse yet, the president (their ring leader), wants to take our guns away with this bunch of nuts running around trying to incite murder and mass murder in some cases..........who knows when they might turn on us with more than the liberal lies they are prone towards.

December 15, 2012 by Tim Brown
When I wrote yesterday about the liberals coming out against guns, I had no idea just how some people would react. What once would have been unthinkable to blast out into public seems to be becoming more normal via things like Twitter and Facebook. Below are a selection of Tweets that are clearly anti-Second Amendment and even calls for the murder of the National Rifle Association President David Keene, along with NRA members.

Isn’t that just like liberals? They are ticked off over a shooting that took innocent lives and they turn right around and want to murder innocent people that have done them absolutely no harm!

But that wasn’t all. There were cries of those wanting to do away with the Second Amendment and banning the NRA. 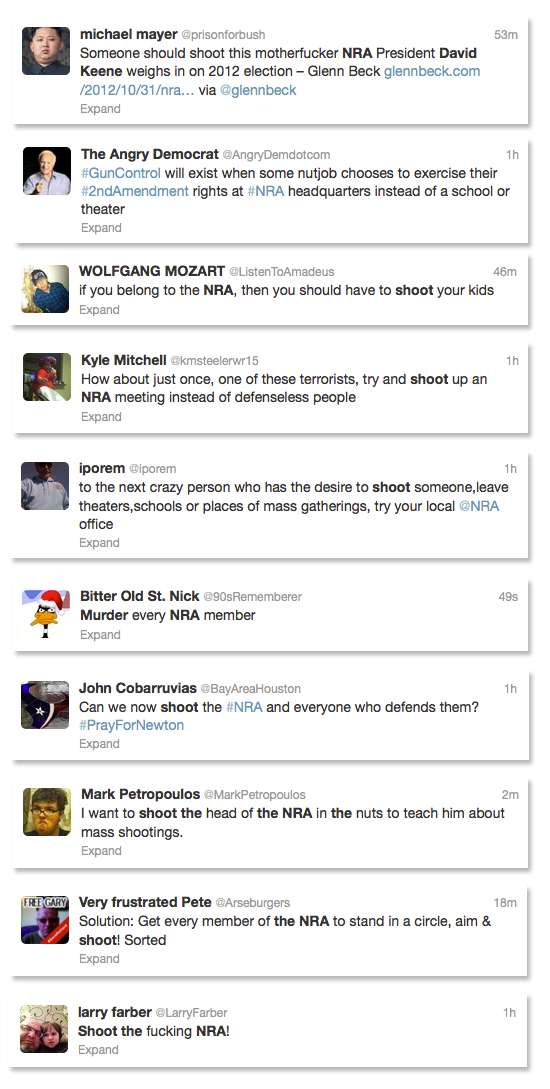 Here’s even more liberal tweets against the NRA and calling for more gun control laws. 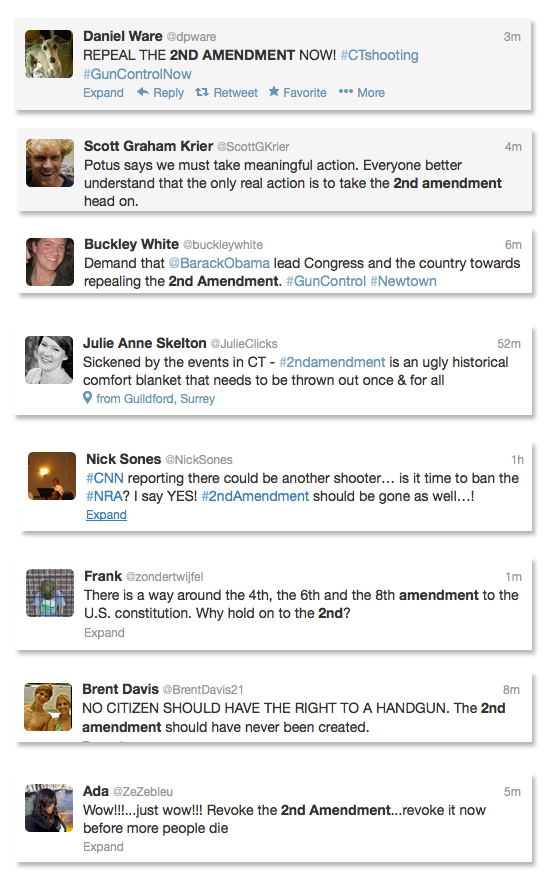 So would banning guns actually reduce gun violence and crime? Well we do have a model to look at, and it’s the same model I point to when people want to start talking socialized medicine, it’s the United Kingdom. On the heels of the Dunblane massacre in Scotland in 1996 where 16 young children and their teacher were killed in the gym of their school by Thomas Hamilton, the cries went up just like they are going up in America now and ultimately a proposal was put forth banning all handguns, except .22 caliber target pistols.

Three months after the Dunblane massacre in March 1996, there was a national firearms amnesty that saw nearly 23,000 firearms and 700,000 rounds of ammunition surrendered.

Did it work? Actually it made things worse.

In 2003, just 7 years after the ban, the London Telegraph reported that firearms offenses have more than doubled since Dunblane.

Can you guess why this didn’t work? If you said because now only the criminals have guns, then you get a gold star!

Let’s make one thing clear. While cities like Chicago and New York City have some of the toughest gun laws and we have seen what they produce, many of you might be surprised that Connecticut is ranked fifth in the nation for gun control laws by the Brady Campaign to Prevent Violence!

For those who may stop by this site who fall into that category, let me let you in on a little something. The Second Amendment was not established so that I could go hunting and it wasn’t for plinking some cans with my kids.

A well regulated Militia, being necessary to the security of a free State, the right of the people to keep and bear Arms, shall not be infringed.

Did everyone else get that? The people, that’s individuals, have the right to keep and bear arms for the purpose of and by necessity to “secure a free State” and the Supreme Court clearly ruled in that understanding. So for all these people tweeting such stupid and asinine things like “repeal the Second Amendment” let me just warn you to be careful of what you ask for. You may just find your neck under a jackbooted government thug who “is only out for your security” or worse yet a neighborhood thug who has a firearm while you stand defenseless, needlessly texting away on your iphone!

I’m just wondering why there are no investigations into the open threats of violence and murder against the NRA president and NRA members. I’m guessing I shouldn’t hold me breath on that one.

UPDATE: By the way, if you think guns are the problem, perhaps you should tell it to the Chinese, where a knife wielding man injured 22 children and one adult outside a primary school yesterday.