As many of you already know, this is not the first school that has been caught using this form on children.  It has been used much closer to home up in Maryland (I keep a file of articles) and was caught there too when a child took something out of the classroom and home to show his parents.  The thing is once you uncover it in a couple of places, you then must question if it is being used in ALL schools and we just haven't caught it?  This is a never ending discovery process, and it needs to be eradicated.  Teachers and schools are meant to teach children to read, do math and the things which fall under education (that isn't exactly being done well or we would not have children graduating from high school that can't read), but now a days our schools are all about indoctrination and many things which they should not now or ever have been involved in.
My feeling on this:  If children can't tell their parents about something they are doing in school, then, they should not be doing it period.

While it is unclear if this is explicitly a Common Core assignment or   not, a group of students today in Tupelo, MS had quite an interesting assignment. The sixth graders at Milam Elementary were given an assignment to do in class, and they were not to discuss this assignment with their parents.

Naturally, telling a group of kids between the ages of ten and eleven to not tell their parents about an assignment is probably the surest way    for them to tell their parents. In fact, it is typically a way to ensure a student sneaks a copy home.

The reason why this is so concerning is that Tupelo prides itself on data driven instruction. Now, data is nice if it helps you figure out if a student needs extra help in a particular area. However, what if that effort is aimed at monitoring the political views of a student? What if there is a shift in student opinion to say, the wrong opinion on gun control or say the wrong opinion on right to life issues? Is the school collecting data toward that end to monitor the political beliefs of these young children? As you check out the school district’s video on data driven instruction, ponder for a moment where does monitoring education end and monitoring indoctrination begin?

Then, consider the assignment below. According to a local clergy, this is the assignment that one of these young sixth grade children was given in class. They were told not to tell their parents about the assignment. I find that part disconcerting right there.

The next is the topic: Are you a Republican or a Democrat? I wonder what ever happened to teaching children that they were Americans? Why is there an effort to monitor political opinions so early in a child’s life?

Do the parents in Tupelo, MS need to have a conversation with the school board about monitoring for indoctrination versus education? Why were the children told NOT to tell their parents about the assignment? Is this a pre-test of attitudes with another test to be given later? Is this part of the data driven education, to monitor the attitudes and beliefs of students?

While it may seem far fetched, parent political views are part of the P-20 data collected  in data driven schools. Why not the child’s political views? 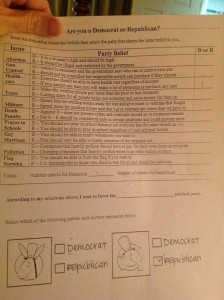 As a side note to the teacher, she doesn’t quite have Republicans corrected stated, unless one is going strictly on party platform. For example under abortion, there are quite a few Republicans pro-choice Republicans. I am not one, but I have met many who are, and I have met many Democrats who keep trying to change their party platform on the matter. Abortion is one of those issues that is difficult to draw a partisan line upon. Even so, I am rather shocked that a teacher is discussing it with ten and eleven year olds.

Further, gun control is another issue that is not strictly partisan. In the part of the world I live in, there are Democrats with a stronger commitment to the second amendment than some Republican Governors, like Chris Christie.

As far as gay marriage is concerned, this teacher has apparently not heard of Log Cabin Republicans. But what I find even more troublesome is that gay marriage is being discussed by a teacher in the classroom. I find it disturbing that a government employee, which is what a public teacher really is, is having a conversation with children of this age on this topic.

Quite frankly, wouldn’t classroom time be better spent teaching something like, math, geography, science, art, or music?  Maybe it is just me, but I have to wonder political affiliation of 6th graders is a priority in this country? Perhaps more of the basic and less of the politics would bring about higher test scores that these politicians seem to expect from our nation’s youth.